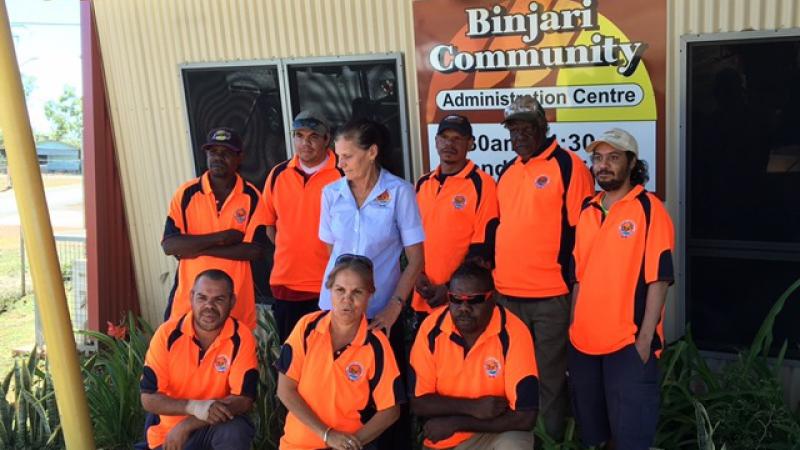 In 2010, a newspaper report described the small community of Binjari in the Northern Territory as the “worst address in Australia”.

Plagued with violence, high unemployment and other social problems, the community’s future was bleak. Now, in 2017, Binjari’s future is bright and full of hope.

What changed? The community began a program designed to build more than structures. They employed people to refurbish and extend homes, construct shelters, footpaths, carports, and fences and in return they built hope and lives.

In late 2014, the Board members of the Binjari Community Aboriginal Corporation (BCAC) approached ex-CEO Debra Aloisi and asked her to return.

In 2015, Debra and the board established a building and training program and began to bid for NT Government contracts. They invited the young men of the community to clean up their lives and enjoy the greater income that comes from employment rather than from welfare benefits.

“Individuals are constantly asking to go out to work on the building program,” Debra said.

Thirty-five young men have been involved in the program since 2015. Before being offered employment, they participate in a training course as part of their Community Development Programme activities and must pass a full medical check-up that includes alcohol and drug testing. They have to remain clean from grog and ‘gunja’ (marijuana) for three months.

“I have two young men that attended one of my pep talks,” Debra said.

“This talk happened about three months ago and on a regular basis they have been saying to me, “Deb three weeks two days” and the next time “three weeks four days” and so forth.”

“This to me would have to be my greatest achievement because these two young fellows were very heavy drug users and now they have the opportunity to work for proper money and provide for their families.”

BCAC also rebuilt what was a poor relationship with the Katherine Town Council. They established positive working relationships with other local entities such as the Roper Gulf Regional Council for which they completed some small building projects. They made a strong connection with the charity ‘Save the Children’ which now comes to Binjari three days a week to run a playgroup for local children.

The township itself is looking cleaner and greener. Things are getting fixed, locals are feeling upbeat, and the community is living up to the concept of ‘community’.

The building program, which began small, is now taking on million dollar contracts. The program’s profits are paid into a trust fund. The fund is used to bid for other projects that are viable and will generate employment. The trust fund is also used for other activities that benefit the whole community.

But it is the effect on the individual which is the most profound.

“We also have another gentleman that has been released from prison after serving 10 years and came out with nothing,” Debra said.

“We helped him with his ID* and also gave him the opportunity to work in the building program which he says is changing his life. He continues to thank us as nobody else seemed to care.”

* An ID is required to open a bank account, to work on a building project, to get a driver’s licence and for many other activities such as enrolling in training for a forklift licence.